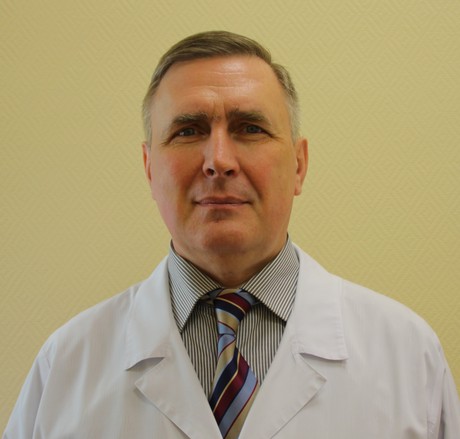 Sokov Evgeny Leonidovich, was born 25.09.1952.
In 1976 he graduated from the 2nd Moscow medical Institute, in 1977 internship in traumatology and orthopedics, then 3 years worked in the outpatient clinic, where in 1978 he began to treat pain syndromes, mastered the methods of acupuncture, manual therapy, therapeutic blockades.
In 1980, he entered the residency at PFUR in neurology and began to conduct and study the effectiveness of intraosseous blockades.
In 1985 he graduated from the postgraduate course in People’s Friendship University of Russia (PFUR) and defended his thesis on the effectiveness of intraosseous blockades in patients with lumbar pain.
In 1988-1989 year interned on the problems of pain in the United States, UCSF, Prof. Howard Fields.
In 1989-1996 he continued his scientific work at the Department of nervous diseases and the Department of pathological physiology of PFUR to study the mechanisms of the effectiveness of intraosseous blockades.
In 1996 he defended his doctoral dissertation, was awarded the scientific degree of doctor of medical Sciences, he became the head of the Department of nervous diseases and neurosurgery of the PFUR and he was awarded the academic title of Professor. As a result of experimental studies in animals and instrumental studies of patients, Sokov E. L. proved the important role of intraosseous receptors in the pathogenesis of pain syndrome, muscle-tonic and angio-spastic syndromes, and also gave a theoretical justification of the mechanisms of effectiveness of intraosseous blockades. As a result of these studies made possible the use of intraosseous blockades for the treatment of various pain syndromes: back pain and joint pain, headaches and facial pain, phantom and pelvic pain, CRPS and FBSS, painful diabetic neuropathy and carpal tunnel syndrome, pain and spasticity in patients after stroke and with multiple sclerosis, erythromelalgia etc. Intraosseous blockade showed high efficiency, cost-effectiveness and safety – there were no complications.
In the framework of this scientific direction were published more than 300 scientific papers, 10 books, obtained 5 patents, under the direction of Professor Sokov E. it was defended 11 master's and 2 doctoral dissertations, research results presented at Russian and international conferences including IASP World Congress on Pain in 1990 in Australia and in 2000 in the United States.
In 2002, prof. Sokov E. L. organized a Pain Clinic in the city hospital № 64 in Moscow and became its head until now, conducts daily therapeutic and intraosseous blockades. In 2002 he organized the website www.pain-clinic.ru.
In 2015 he became the head of the Department of Algology and rehabilitation of RUDN. The Department implements specialization of physicians in Algology, and treatment intraosseous blockades. In 2017 prof. Sokov E. L. organized the “Association of Pain Medicine Specialists” and became its President. The Association holds a conference "Pain Medicine in Outpatient Practice" on April 6-7, 2018 in Moscow. Sokov E. L. is a member of the Board Presidium of the all-Russian society of neurologists, a member of the editorial Board of the journal "Russian journal of pain", a member of IASP.

Under the combined actions of the etiological factors in different parts of the skeleton occurs dystrophic - degenerative bone changes and disturbance in intraosseous blood flow, which leads to increased intraosseous pressure and over stimulation of the receptors.

Increased afferentation of intraosseous receptors promotes to the facilitation of other afferent flow, increased motor reactions, corticofugal reduction reactions and effects on the respective segmental level,  which at this level leads to the formation of typical clinical symptoms: pain, musculo-tonic, vasospastic and hypertrophic syndromes. The set of clinical symptoms depends on the degree of representated "target tissues" in the appropriate area of the affected segmental division of the musculoskeletal system.

The set of clinical symptoms depends on the degree of representated "target tissues" in the appropriate area of the affected segmental division of the musculoskeletal system. So, hyperafferentation of intraosseous receptor in spinal osteochondrosis manifested by various clinical picture: in the lumbar - represented by affecting various local tissues, in the cervical – additionally affecting  the vertebral artery, in the thoracic - affecting the internal organs, vertebro- visceral syndromes.

Increased  afferent impulses from various intraosseous receptors of the skull bones can cause mainly pain and vasospastic syndrome in the face or head, and to a lesser degree musculo-tonic syndrome. The mechanisms in effectiveness of the therapeutic intraosseous blockades is based on  cortical bone trepanation and immediate impact on the bone marrow, leading to the normalization of intraosseous pressure, through the mechanisms described above reducing the Neuroorthopedic clinical manifestations.


The therapeutic effect of intraosseous blockade is due to several factors:

1. Inserting a needle into the bone is cortical decompressive trepanation, which reduces the intraosseous pressure and hence reduce intraosseous receptor overstimulation.

2. Within 3-6 weeks after insertion of the needle is the restoration of damaged bone trabeculae, which stimulates reparative regeneration and improves local microcirculation.

3. Inserting a needle into the bone exerts a powerful reflex positive impact on the pathogenetic mechanisms of spinal osteochondrosis.

4. The introduction of drugs directly into the bone marrow vertebral allows them to reach high concentrations in bone and maximum impact on osteoreceptors.

5. Due to the peculiarities of the blood outflow from the bone is reintroduced with the drugs letting the drug flow into all the surrounding bone tissue.

6. Introduction of liquid into the bone under pressure and opens reserved  bone vessels, thereby creating conditions for normalization of intraosseous flow.

The basic principles of Pain clinic:

1. Performing procedures according to international standards;
2. Strict adherence to the rules of antiseptics;
3. The maximum patient safety;
4. The introduction of new methods of treatment;
5. Giving maximum information to patients about the treatment.

The Russian version of this page
/Русская версия этой страницы/

Read in other sections:
Intraosseous blockade
Osteogenic theory
Diseases that we treat
The applied methods of treatment
Glossary
Contacts